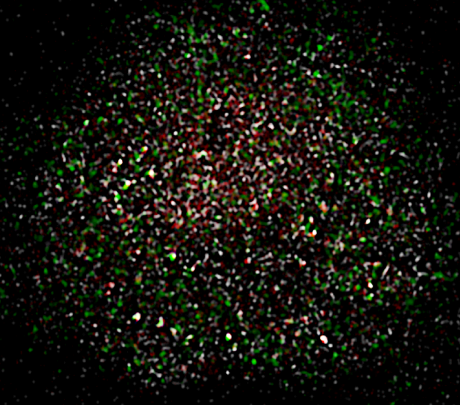 Super-resolution optical microscopy imaging has been used to study the interaction between MS4A4A (green) and dectin-1 (red) in lipid rafts (white) of the plasma membrane of macrophages engaged by a target expressing beta-glucan, a dectin-1 selective ligand.

The results of an international study, directed by professsor Massimo Locati at his group at the Department of Medical Biotechnology and Translational Medicine, have just been published in Nature Immunology *. At the heart of the study, the discovery of the non-redundant role of the MS4A4A protein in activating a protective immune response against the metastatic spread of tumors. This molecule, which is selectively expressed in macrophages, a key cell type in innate immunity, was found to associate with the Dectin-1 receptor and control its function. By doing so, MS4A4A is essential to activate a dialogue between macrophages and Natural Killer cells which results in cancer cells killing and prevention of their metastatic spread.

"We discovered that MS4A4A was highly expressed in tumor-associated macrophages 10 years ago, but its role has become clear to us only when we recently discovered its ability to network with other receptors and tune their functions”, explains Massimo Locati, coordinator of the study and corresponding author of the article together with Alberto Mantovani, scientific director of Humanitas and professor of Humanitas University and leader of the AIRC 5x1000 program which supported this project.

“In primitive tumors that still do not give metastases, macrophages may recognize some types of cancer cells and give Natural Killer cells the signal to kill it. MS4A4A is essential for macrophages to activate this antitumor response, thus preventing the formation of metastases. For this function MS4A4A is a candidate biomarker of tumor-associated macrophages, a relevant finding considering that the prognostic significance of the presence of macrophages in tumors has been recently clearly established. MS4A4A belongs to a family of proteins, one of which CD 20 has proved to be a suitable molecular target for the development of immunomodulatory therapies. This discovery therefore also opens up new therapeutic possibilities based on the use of MS4A4A as a possible target for innovative immunotherapy approaches, to the benefit of an increasing number of cancer patients”.

This international study, which involved other 10 institutions beyond UNIMI and Humanitas, has been conducted by Irene Mattiola of the Department of Medical Biotechnology and Translational Medicine. Two months ago, in Bologna, dr Mattiola received for this study a Young Innovators Italy 2019 Award, the Italian edition of the MIT Technology Review international award. Established in 2010 by MIT Technology Review, the magazine of the MIT Massachusetts Institute of Technology dedicated to innovation, Young Innovators Italy rewards young academic innovators for projects in the field of emerging technologies with strong scientific, commercial, political and social impact.